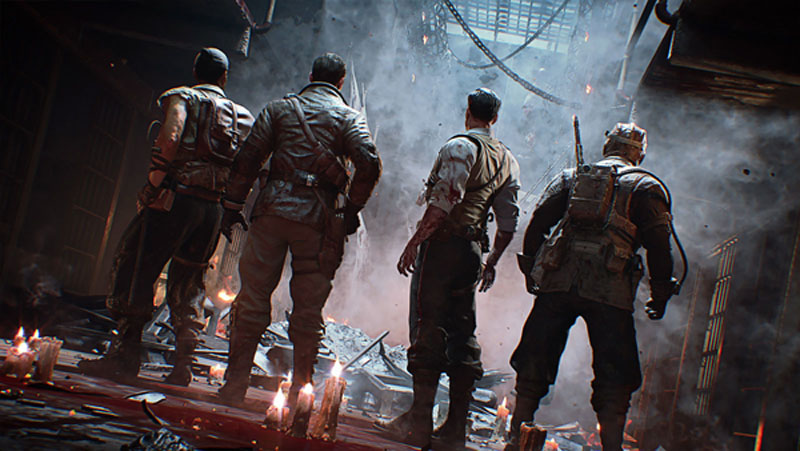 Black Ops 4: Call of Duty: Black Ops 4 is a multiplayer first-person shooter video game. Bo4 is my favorite and most memorable game on this list I’ve been playing the black ops series since I was a little boy. When blacks ops 4 came there was a lot of changes including the campaign. For the first time ever in the series, Call of Duty: Black Ops 4 doesn’t include a traditional single-player campaign. In place of this, the universe – set between Black Ops 2 and Black Ops 3 – will be introduced through small solo missions that also give you a chance to try out the specialists you’ll be using in competitive multiplayer. You’ll learn about their backstory in these missions, but it’s not meant as a replacement for the campaign. I'm personally not a fan of the removing of the campaign but the game still turned out good.  There are 10 different specialists to choose from in Call of Duty: Black Ops 4’s competitive multiplayer mode, each bringing unique abilities and tricks to help accomplish your objective or take out a particularly difficult enemy.
Ajax – A Breacher with a ballistic shield that always you to shoot while blocking everyone's shots and a tactical 9-Bang grenade.
Battery – A Demolition expert with war machine grenade launcher and cluster grenade.
Crash – A Healer with a TAK-5 medical kit and assault ammunition pack.
Firebreak – An Area denial with a flamethrower and reactor core.
Nomad – My personal favorite, A Nature-lover with an attack dog and tripwire-equipped explosives.
Prophet – A Hunter with a tactical electrical rifle and player-seeking shock mine.
Recon — An Intel operator with vision pulse giving him and his allies the ability to see where and what direction his opponents are going and sensor darts.
Ruin – A Rusher with a “grave slam” attack and grapple gun.
Seraph – A Tactician with a high-caliber revolver killing her opponents with one shot and deployable beacon.
Torque – A Defender with barricades and razor wire.
There is also a huge variety of weapons to choose from personally my favorite is the Cordite submachine gun. This well-rounded SMG is very easy to use and has great iron sights if you don’t want to waste create-a-class points on a sight. Also with Bo4 bringing back the infamous zombie mode, there has also been a few changes in that as well. Black Ops 4 goes more heavily into its Zombies mode than any other game in the series, with three separate Zombies campaigns available at launch giving you a deeper storyline. The zombie modes give you three new and remodeled maps to adventure.
Blood of the Dead is a new-school take on Mob of the Dead from Call of Duty: Black Ops 2, the map takes place at Alcatraz prison.
Voyage of Despair is set on the broken apart Titanic ship in 1912.
Perhaps the most bizarre and shocking of the three launch-day Zombies campaigns is IX, which takes place in Ancient Rome.